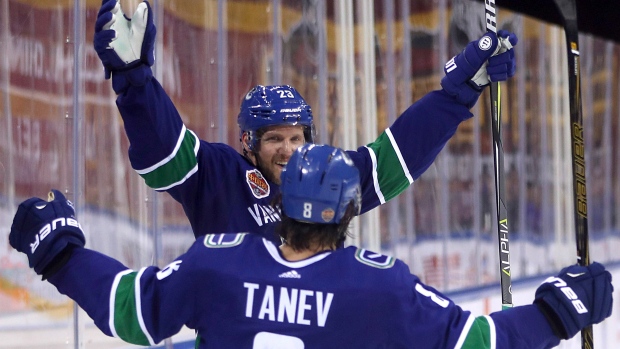 Canuck fans understand better than most, that when Toronto is in town, expect them to be represented in numbers – expect to see as many if not more Leafs jerseys than Canucks jerseys – and expect a spirited battle of supporters from puck drop to the final buzzer to the moment the lights come on in the bar.

It has become a tradition among a group of friends of mine – about half Vancouver fans, and the other half Leaf fans – to snap up some seats and represent our respective squads in a shit-talking marathon that transforms this one measly game on an 82 game schedule into the Stanley Cup of the regular season. I don’t have to tell you folks, it matters who wins… Oh how it matters.

Fortunately for the good guys – the Canucks pulled off a narrow victory on Saturday and the peacocking belonged to the local boys & girls in blue & green.

While the game itself was relatively uneventful – 2 first period goals for the home-squad followed by some sound defense and a great game from Jacob Markstrom to cruise to Victory-ville – the gamesmanship in the stands was as outrageous as you may expect.

While we Canuck fans claim to hate the Leafs and their obnoxiously loyal fans, I still love the loud fucks. They bring out the best in Vancouver’s fans and are a reminder that we Canucks are just as rabid and loyal as Leafs supporters… especially when our arena is taken over by droves of blue and white jerseys.

If Toronto supporters want to step into our arena and start “Go Leafs Go” chants – well, it’s up to us to let them know in a hurry that they will drowned out by “Go Canucks Go” chants that normally wouldn’t reach those decibels in any other regular season tilt.

Rather than pout about being outnumbered in our own barn, we Canuck fans stand tall, get loud and remind our visiting Canadian brethren where the they are…

And to my Leafs supporting brothers and sisters: Come on back next year so we can deflate your pride yet again. But afterwards, we’ll have a beer… cause we’re all Canadian and it’s the love of the game that wins every time.