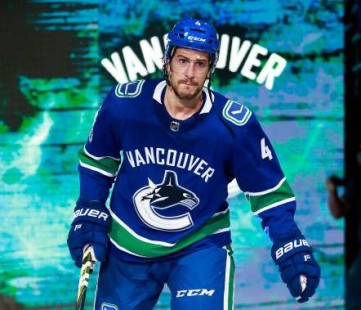 The recent ineffectual play of the Sedin twins and the corresponding dive in ice-time lately was turned on its head on Monday night as the Canucks stormed back from a 2-0 deficit only to trip over the finish line against the Detroit Red Wings.

Jake n’ Bake with Hank and Dank was looking dangerous for a good chunk of the game; however it was Tomas Vanek who would eventually slot in for the young gun in the third as Virtanen joined Burmistrov and Gagner. The Canucks fell behind by two in what was looking like one of those games where our boys just weren’t able to bury the biscuit (anyone see Schneider steal the show when New Jersey was in town?).

This was not to be the case. The Canucks came into the third period with some gusto and will-power. About half-way through the final frame the Sedins and Vanek combined to cut the lead in half. Only minutes later, a nice little set-up from Horvat followed by an even nicer little friggin dangle from Michael Del Zotto followed up by a slick wrister top-ched for his first as a Canuck drew the teams even.

Side note: The Sedins went from under 9 minutes a piece of ice-time on Saturday against the Penguins to over 17 minutes against Detroit last night.

The game looked as if it was destined for overtime, which would have felt like vindication for Vancouver after the dramatic come-back. But alas, the puck had different plans. A harmless looking zone-hold by Detroit ended up falling to Tomas Tatar in the slot who let a quick-one go by a surprised Markstrom who was late to react as Rogers Arena deflated like  with a minute and change on the clock.

The Canucks applied some nice pressure to end things, but when the chips fell, it was 3 for the Wings, 2 for the Nucks.

While the end of this tilt was a heartbreaker, it was encouraging to see that the Canucks had it in them to rally. Blocked shots by Detroit was perhaps the biggest factor in this one as their skaters got in the way of 19 shots. A few more through the seams from the point could have made a difference.

No time to wallow after this one, we’re going to Calgary to take on the Flamers tonight.