The Canucks kicked off the 2017-2018 campaign touting the 4-line system. The theory is to have little or no differentiation between each forward line with regard to skill level. Obviously, a coach still needs a shut-down line and a line to lean on when he needs offense, but the basic idea is to spread out the talent so every line is a potential threat. This makes a team very difficult to defend against and when the ice-time is shared more evenly, tired legs in third periods are less of a factor.

Since Travis Green took over, this theory made sense for a Vancouver team with diminished expectations and a handful of new faces. Fresh legs and a relentless attack were, on paper, the best chance the Canucks had to be competitive.

Today, 4 lines that looked even at the start of the season are now showing some disparity thanks to some guys over-performing and some under-performing. Let’s break it down.

There is now little debate over who the Canucks top line is. Brock Boeser has been a stud and leads the team with 13 points (5 G / 8 A) while Bo Horvat and Sven Baertschi share second place with 11 points (5G/6A & 4G/7A respectively). This line has speed, skill, and with the addition of Boeser, the ability to finish with a bonafide sniper. Oh yeah, did I mention that they have an average age of 22?… Yeah. Things are looking up for this trio. 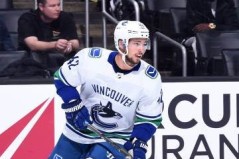 The interesting combo of three free-agent signings has not necessarily “clicked” yet, but they have shown a few dandy moments. Tomas Vanek is perhaps the most impressive new signing. He has 4 goals and a handful of goal posts. These guys are a bunch of wild-cards that could flip either direction as the season progresses. If they can’t show some consistent production soon; however, look for Loui Eriksson to fill in for Burmistrov or even Gagner.

The Sedins, as painful as it is to admit, have looked like shadows of their former selves. With only 8 points and a plus/minus of -8 between them, they are going to need to find some extra juice if they want to keep up. A jolt of Jake helped them find a little rhythm, but it has done little to boost their offense. While the twins have looked okay on the powerplay, the 5-on-5 game needs serious work.

The pesky line of Dorsett, Sutter, and Granlund have been outstanding to start the year. They have not been an offensive powerhouse (except for Dorsett who has 8 points), but defensively; they have been playing some dynamite hockey. Top penalty killers and matching up against opposing top-lines has been their bread and butter. They have a combined plus/minus of +6 despite their penalty killing roles and matching up against the likes of McDavid, Crosby, Malkin, and Ovechkin so far this year.