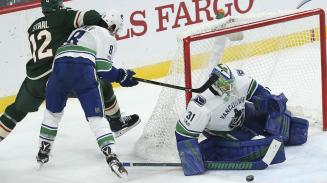 The Vancouver Canucks capped off their first road-trip of the season in a goaltending duel between Devan Dubnyk and Anders Nilsson. Nilsson got the best of the Minnesota Wild as the Swedish netminder made 29 saves recording his second goose-egg of the season in an impressive 1-0 win. Big Jake Virtanen played the hero, burying his own rebound half way through the third period.

Brock Boeser had friends and family watching as he returned home. Unfortunately, the youngster was held off the score-sheet.

Despite the razor thin scoreline, both teams had a handful of chances in a relatively fast-paced first two periods. That being said, it was also a classic Vancouver vs. Minnesota tilt in that defense came first and quality shooting lanes were harder to come by than a free parking space in the West End in the middle of summer.

Vancouver was without Alex Edler and Troy Stetcher who have both been listed on the IR and are both expected to miss the next 4-6 weeks. It’s encouraging to see that the Canucks defensive core depth is starting to pay off. Alex Biega had a rock-solid tilt in relief of the injured Stetcher and newcomer Derrick Pouliot is looking more comfortable with every game.

Perhaps the most exciting part of this game was one of the first real signs of consistency from Jake Virtanen, who is thriving along side Hank n’ Dank. The former first rounder is opening up the ice for the twins and allowing them to create some dangerous plays on the cycle with Jake wreaking havoc in front of the net or retrieving pucks. 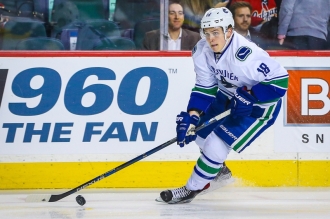 The young winger has been utilizing his hard wristers which was on full display last night as he battled through some traffic, fired a quick one towards goal, fought for his own rebound and buried an unassisted gino top ched on Dubnyk for the game winner.

Nay-sayers will call this recent streak an anomaly; however, the difference between the 4-game win to start last season and this year’s string of success is that the Canucks have deserved to win most of their games this season whereas last season there was a lot more puck-luck and a handful of stolen games thanks to Ryan Miller. The team is gelling in a hurry and proving to be a pesky-squad that’s giving teams trouble. If the goaltending stays solid, special teams improve, and we get lucky on the injury front, we could see Vancouver battling for a wildcard spot in 2018.