The understated Vancouver Canucks just keep on rolling. Baertschi nets a pair, Dorsett keeps on sniping, and Virtanen buries his first of the year in a one-sided drubbing at Joe Louis Arena where the Canucks bowled over the Wings by a score of 4-1. 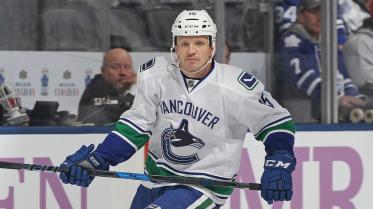 this road-trip — that was not the case on Sunday as Vancouver came out flying, peppering Jimmy Howard with 17 shots in the first period alone. Sven Baertschi opened the scoring 14 minutes in after finally solving the Detroit netminder with some quick hands in front of goal. Less than 5 minutes later a cheeky wrister from Mantha drew the Wings even just before the end of a first period that leaned heavily in the Canucks’ favour.

The second period looked like Vancouver’s best period of the season thus far. Derek Dorsett, the team’s leading scorer added another tally as he chipped the puck onto Howard’s shoulder to see it trickle over and into the net. The lead was extended with Baertschi’s second of the game (and season) off a nice little fore-check by Alex Burmistrov leading to a quick snipe from the middle of the circle.

30 seconds before the end of a one-sided second period, Daniel Sedin broke out of the zone on a 2-on-1 with young stud: Jake Virtanen. Pass, shot, rebound… SCORES! Virtanen finally nets his first of the season in what was undeniably his best game of the season. Not only did the young wrecking-ball get himself onto the scoreboard, but he also had 8 shots on goal, showed a lot of speed and grit, and even flattened the lay-out king: Niklas Kronwall with a clean open-ice hit.

Canucks fans are finally seeing what we hoped for out of JV18, a budding power forward with a big ole confidence boost. It’s starting to look like lining up Virtanen with the Sedins is providing a real nice shot in the arm for the twins and giving Jake a chance to show off some of that offensive prowess that warranted his selection at 6th overall a few years ago.

I would be remiss to exclude the play of Jacob Markstrom who, despite facing only 20 shots and allowing a squeaker through in the first, settled down and looked rock-solid as Vancouver coasted through the third period. It’s shaping up to be a nice little opening road-trip!