After finishing near the bottom of the table last season, firing Willie D to open up room for a rookie NHL coach in Travis Green; expectations have almost never been lower for the Canucks. But are they as bad as, say, the Vegas odds might suggest?

Call me biased, but I don’t think so, and the team’s recent play reflects that. 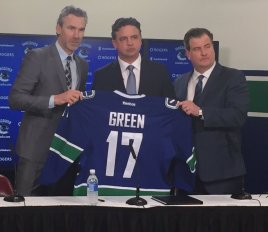 First of all, the Canucks off-season signings most certainly make this team better than last year’s squad. Thomas Vanek, Sam Gagner, Michal Del Zotto, Alex Burmistrov, and Patrick Weircoch add some depth and veteran leadership to a relatively young core. They have helped take the pressure off the youngsters to produce and, if some or several over-perform, any one of those guys make for decent trade bait at the deadline (should the wheels fall off at some point).

Secondly, Travis Green has already proven to be a positive influence on the developing assets in the Canuck line-up. By giving a guy like Virtanen a shot with the twins (which is starting to pay dividends) and by showing faith in guys like Alex Burmistrov, Sven Baertschi, and Brock Boeser – Green has managed to harness that youthful exuberance and has the young guys playing the right way under the supervision of the team’s seasoned veterans.

Beyond faith in the youth, Travis Green has also done an excellent job balancing the lines in a system that refuses to identify a “first line” – but rather relies on a relentless attack and some degree of offensive talent on each trio. This has and will continue to help keep the Sedins fresh and help develop the youngsters simultaneously. It seems like every game has a different line that steps up as opposing coaches scratch their heads with regard to match-ups.

Green has also set a high-bar for Bo Horvat, who has already answered a call-out by his new coach with a pair of great bounce-back games. Coach Green expects the consensus future captain to bring his A game every night – the fact that Bo responded positively is a great sign moving forward (2 assists on Sunday vs. Detroit).

Finally, as I have touched on in previous posts, the addition of all the off-season signings has created a great deal of healthy internal competition – and it shows on the ice. Canuck players are looking over their shoulders as performances on the farm-team push the big boys to perform for their jobs. Nobody’s position, besides some key veterans (Sedins, Edler, Tanev) is safe, and that’s a great way to foster a culture of accountability. 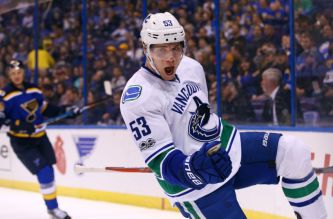 Every season there is a team or two that surprises the hockey world, a few years back it was the Columbus Blue Jackets under Tortorella, last year it was Edmonton and Ottawa making surprise splashes in the post-season. Why not us? Despite what the pundits, armchair cynics, and Canuck nay-sayers will tell you – there’s always a chance that this team keeps finding a way until they’re in a win-able playoff race come March.

So, are playoffs a pipe-dream? Not necessarily.

The new-found hunger of the underdogs could have the Canucks surprising some teams early, it’s just a matter of finding some consistency on and off the puck. We have yet to face off against many contenders, but a win against Edmonton in the opener and the flashes of dominance in recent games indicates that we’re dealing with a squad here that has a thirst for wins. That thirst can be a powerful thing and can thwart a complacent team despite looking weaker on paper.

One thought on “Are the Canucks really all that bad?”

My Tweets
Join 518 other followers