The Canucks bowled through Pennsylvania in style with back to back victories over the Philly Flyers and Pittsburgh Penguins by identical 5-2 score lines – both games came with 2 goal performances out of Brock Boeser. This team’s resilience and consistency has left pundits scratching their heads over how to classify the surprisingly hot Vancouver squad. 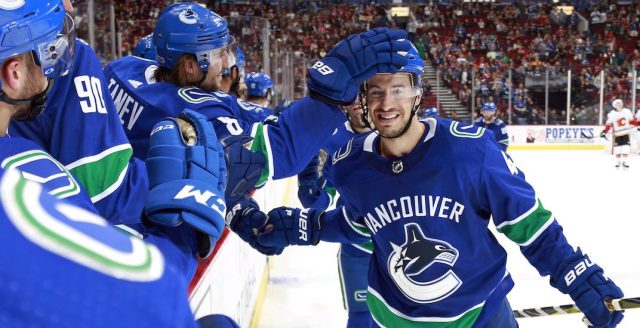 Are the Canucks playoff bound?… Are they in for a harsh reality check?… Are they going to be battling for a wild-card berth in March? All questions without answers.

The uncertainty surrounding the Canucks and their fantastic start could make for an interesting trade deadline. Signings like Del Zotto and Vanek were initially perceived as stop-gaps until the youth movement was ready to take over – guys that could be used as trade-deadline bait to further stock the asset-cupboards. The aforementioned have; however, exceeded expectations, found chemistry, delivered versatility and have helped propel Vancouver into a playoff spot as it stands. So what happens now?

If the Canucks are well out of playoff contention in March, the decision is easy – trade Vanek, see what kind of market there is for Del Zotto, and shop Gudbransson around (he becomes a UFA at the end of this season).  But… if the Canucks are in a playoff spot or knocking on the door, these “easy” decisions now become very complicated.

Both Vanek and Del Zotto have been very effective additions this season, especially in providing a jolt on the second powerplay unit. So why would a team with realistic playoff hopes unload them, essentially throwing in the towel on a season not lost? On the other side of the coin, if their play remains solid for the next 4 months, their stock will be peaking… all of a sudden the return on investment on these off-season UFA signings is starting to look great.

Just to throw another monkey wrench into the discussion, GM Jim Benning has yet to sign an extension with the club – as its rumored that the Aquilini clan are looking at other high profile General Managers that may be available (Ken Holland – Detroit and Doug Armstrong – St. Louis).

So what is in Benning’s best interest? Sell to acquire more assets like last season when he saw some promising returns for Jannik Hansen and Alex Burrows; or sit tight with what we have and hope it’s enough to steal a playoff spot, or maybe even (dare I say) look to acquire pieces in anticipation of a playoff push.

Fuck… Who knew success would come with so many question marks?

If you are waiting for me to deliver concrete and insightful answers to all these questions, I apologize. They ain’t coming. The fact of the matter is, this season is only at the quarter mark and there’s still plenty of hockey to be played – the Canucks’ performance moving forward will determine the fate of our new signings and aging veterans. So, don’t ask me… Father Time will tell us when he’s good and ready – and that old prick waits for no one.