Vancouver has one of the most perplexing fan-bases in professional sports. Some nights at Rogers Arena it sounds like a funeral home, others, it sounds like a Seahawks playoff game in Seattle. Then there’s the playoff run of 2011 where the whole city hopped aboard to celebrate… and then proceeded to try to burn the city down.

In order to help try to make sense of our schizophrenic supporters, I have done my best to break them down into 5 categories. Where do you fit?

Naive Optimists, like myself I suppose, are fans through thick and thin. They may disagree with coaching or management at times, but they often suppress those opinions to prevent them from tainting their rose-coloured view of the squad. These fans often carry an air of superiority about them, especially when the team is excelling – turning their nose up at fairweather fans that are only around for the good times and are nowhere to be found for the bad.

You might be a naive optimist if you agree with this: “Loui Eriksson was a decent signing! Sure he had a rough first season, but career stats indicate that he’s good for at least 20 goals, maybe 50-60 points? I’ll pay $6m all day for that kind of production.”

Haters (aka: Trolls) are fans that disagree with almost every decision made by the GM or coach. They’re the type that threw tantrums over the Hunter Shinkaruk for Markus Granlund trade or retroactive tantrums when we found out Ehlers would outproduce Virtanen. A Hater is the kind of person that has called the Sedins the “sisters” since their draft year despite the twins proving to be the most productive Canucks in history. They often feel validated if the team is losing just so that their black-cloud opinions prove temporarily correct.

You might be a Hater if you agree with this: “The Canucks won’t win a Stanley Cup in our lifetime because they keep hiring idiots to manage the team. Did you know that we passed up on Jagr in 1990? And don’t get me started on Juolevi over Tkachuk! Fuck this shit, here’s to another 10 years without a playoff appearance.” 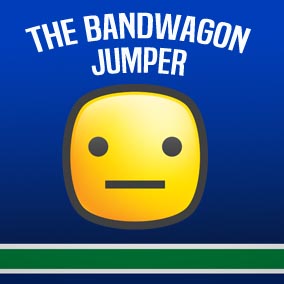 Bandwagon Jumpers were a plenty from about 2008 to 2013, but nowadays, they can’t be differentiated from passing tourists. These types might start showing up to games now that the team has strung a few wins together, but they might also say “hey, is Chris Higgins a scratch tonight?”. These fans will be the loudest supporters once playoff time rolls around but are ever so absent leading up to them. More often than not, despite being vocal, bandwagon jumpers usually don’t know what the fuck they’re talking about.

You might be a Bandwagon Jumper if you agree with this: “The Canucks never should have traded Mason Raymond, I mean, the guy scored 2 goals the last time I saw him play. I bet he’s tearing it up wherever he’s at now.”

Armchair GM’s always know better than the professionals in charge. Regardless of how fruitful a move might prove to be, they will always have an alternative theory that could have improved the Canucks’ return. These folks are typically die-hard fans with little faith that the head office is anything more than a bunch of goof-balls talking about their hockey pool and statsturbating over the great signings they have made in the past.

You might be an Armchair GM if you agree with this: “Okay, so here’s what you do… just trade the Sedins for like a Tyler Seguin type, we’ll free up cap space and sign someone like T.J. Oshie. Imagine a line with Seguin, Boeser, and Oshie? Unstoppable! But noooo, management won’t be able to pull of a deal like that even though it basically guarantees we will win a cup.”

Nostalgics operate in a world of hypotheticals. I mean, can you imagine if you paired up Chris Tanev with Dave Babych? Unstoppable. A young Pavel Bure along side Horvat would be just ridiculous. These types of fans are often quite fun to talk to as they live vicariously through the past golden ages of Canuck hockey. Unfortunately, their opinions are rarely based in reality and rely pretty heavily on imagination and time-travel.

You might be a Nostalgic if you agree with this: “So picture this… first line: Bure, Linden, Naslund. Second line: 27 year old Sedins with Anson Carter from that one season he scored 30. In net, Kirk McLean backed up by Roberto Luongo. We almost signed Gretzky back in the 90’s so add him to the roster and we’ve got ourselves a dynasty!”

Hey, regardless of what type of fan you are. Just know that so long as you support our beloved Canucks, even if it’s just during the good times or if it comes with a hefty dose of pessimism; we love you. We’re siblings who all want the same thing: A Stanley Cup that we can rub in to the faces of other Canadian teams’ fans.

After all, isn’t that what this is all about?