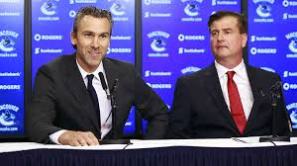 If you’re a pissed off armchair cynic who thinks that everything the Canucks Management team has accomplished has been disastrous, perhaps you need to take into account a few key moves that, moving forward, may prove brilliant. I realize that mistakes have been made, but lets run through a few highlights.

I realize that passing on the likes of Nylander and Ehlers in the 2016 draft for local-boy Jake Virtanen could be looked at as just plain silly – but time will tell and it’s starting to look like big Jake is coming into his own. If you also criticize Benning for creating a “soft” core, well then maybe you need to consider what this line-up looks like without a beastly Virtanen prowling for big hits and chances off the rush.

I realize that trading away Jared McCann and a pick for Gudbranson looks a little silly, but again; Gudbranson is still a young guy and an absolute beast. An injury ridden 2016-2017 campaign has not provided enough ammunition to toss this guy out on his ass. Another gritty addition who may turn a few heads this year.

I realize that drafting Olli Juolevi over Matthew Tkachuk looks like an epic gaffe right now, but defensemen are hard to come by and take longer to develop than forwards. Jury is still out on this one.

But what ever happened to Hunter Shinkaruk?… Here’s a guy who Canucks fans were very excited about. The young highly skilled goal scorer seemed like a mint prospect, but our management staff disagreed and decided to trade him away for what seemed like an underwhelming young forward by the name of Markus Granlund. Granlund scored 20 goals last year and Shinkaruk is on waivers. 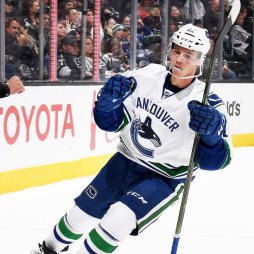 mention, a great looking crop of draft picks this year (Pettersson, Lind, Gadjovic, Di Pietro, Palmu) some of whom may make a splash as early as next season.

They have loaded up the cupboards with mid level to high caliber prospects. By doing so they have created a ton of internal competition to separate the men from the boys – and with the likes of Virtanen and Boeser cracking the A-Team, it appears to be working.

2 Reasons: First, these guys are signed to affordable short-term contracts and can be flipped at the trade-deadline for even more assets in a stacked draft year… Free picks. Secondly, the addition of seasoned veterans adds to the competition to make this team. Every player on the current roster is looking over their shoulder at the Goldobins, Wierciochs, Rodins, and Molinos, who are working their bags off in Utica for an opportunity.

Are we going to win the cup this year?… Maybe?… Okay, probably not (see that optimism? Anything can happen after all); but we can likely all agree that the rebuild is looking good. And with a great group of prospects reaching the age of eligibility next year, bombing this season is not a terrible result.

Lest we forget the clusterfuck of high-profile prospects in Edmonton before McDavid came along and a parade of studs signed on for an opportunity to play with him. They were a laughing stock for over a decade – but look at them now. I foresee the Canucks being a playoff caliber team as early as next season with prospects to spare.

So hey, loosen up your grip on Benning’s throat for now. How often do we see a GM fired just so that some other schmo can take credit for their vision? The Canucks aren’t headed for the dark-ages, rather things are looking as rosy as they have for the past 6 years.

Sidenote: $6m for Loui Eriksson?… Fuck. Okay, that one was brutal.